How many pagans does it take to fill in the census?

Counting pagans is like herding cats, it’s just about impossible.
At the last UK census in 2001 it was the first time that people were given the opportunity to describe their religion as ‘other’. Many pagans chose to register their religious affiliation on the census, yet pagan didn’t really make an impact on the figures. 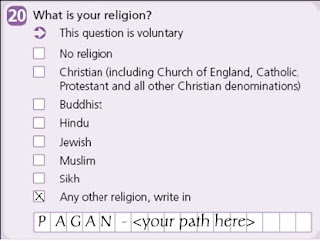 The reason for this was because pagans are a varied bunch of people. They don’t have a single leadership, doctrine or even a single set of beliefs. Paganism is an individualistic approach to life that has many common characteristics but many variations too.
So Druids described themselves as Druids, Wiccans described themselves as Wiccans, Thelemites described themselves as Thelemites. (I think you get the picture by now.) Pagans are people who like to describe themselves as they see fit, not as others might like to describe them. Pagans are very individualistic.
So the 2001 census results led to considerable under reporting of pagans in the UK. It’s thought that pagans are the seventh largest faith group on the country but because of the variation amongst all the flavours of paganism our numbers didn’t add up to much.
So the solution is to retain our individuality while banding together. The term pagan has become the most popular description of who we are as a community. Not everybody prefers it but without it we wouldn’t have the recognition we deserve. Without standing up to be counted we would also face much greater prejudice in the wider social sphere.
The PaganDash campaign is urging us to describe ourselves as Pagan with an extra entry for our own chosen path. So you might express yourself thus:
Pagan-Druid
Pagan-Witch
Pagan-Shamen
Pagan-Wiccan
Pagan-Thelemite
Pagan-Magician
Pagan-Tantric
That way the census people can count pagans as a group or as subgroups according to the desires of each individual.
The simplest ideas are often the best.  :o)