Local council to chop down Hogwarts Forbidden Forest …or something

It starts with H and it’s not far from the Barrow residence, so it’s the best I could do. 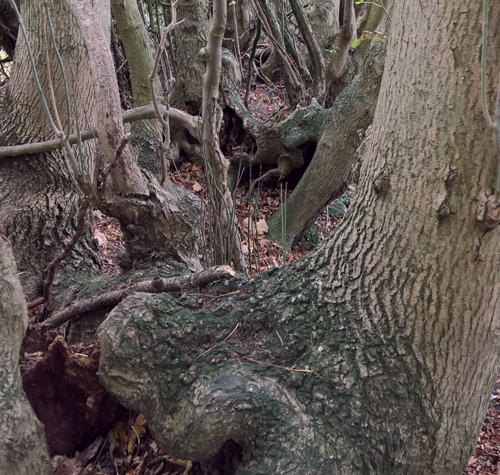 A footpath through Hemel Hempstead, that is said to have existed since the 14th Century, is possibly being dug up, defiled and generally tarmacked over.

But the footpath isn’t the issue. The ancient hedges that run alongside the footpath and their gnarled and distorted forms are what makes them reminiscent of the Forbidden Forest at Hogwarts, or ents, or godswoods… or something.

The current situation is that the local authority, Dacorum Borough Council, have seen fit to grant planning permission for an extension to an existing industrial estate that will dig up, defile and generally tarmac over these hedges and leave the footpath as a mere pavement alongside the roads that will make up the industrial estate and its warehouses. Of course the council are saying that they are doing their duty maintaining an ancient right of way, planting a few new trees, etc., but it’s the digging up, defiling and general tarmacking over that is the issue. 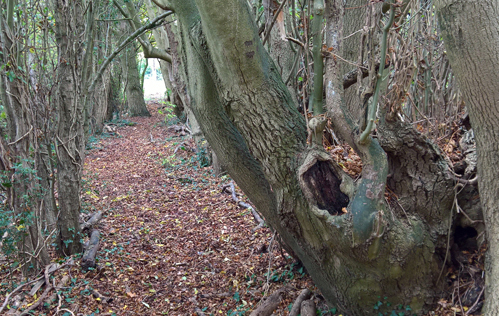 Centuries old footpath due to be destroyed

The planning regulations say that it is not permissible to chop down, dig up or generally defile a hedgerow that is at least 30 years old, more than 20 metres in length, adjoins another hedgerow or forms part of a boundary to agricultural land, and tarmacking over is right out of order!. The hedgerows along this footpath fulfil all of these criteria and probably more. In fact this footpath also fulfils criteria relating to an ancient parish boundary, is adjacent to an archaeological site currently being excavated, is part of an ancient field system and marks the boundary of an ancient manor. Clearly the local authority have made a mistake in granting planning permission to dig up, defile and generally tarmac over this particular historic location. 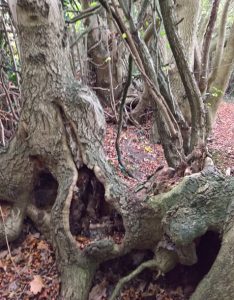 Ancient trees – evidence of the age of the footpath

Further away from our location of Forbidden Forest trees, or ents, or godswoods the footpath can be traced across the town where it passes in an almost straight line between the houses, past lockup garages and schools, sometimes passing along streets but most of the time along a line away from the roads where it must have run for centuries. Along one stretch, between a local comprehensive school and a town park, it’s easy to see old laid hedges that were mature trees 50 years ago and must have been laid many decades before, possibly in previous centuries.

Down in the valley it’s possible to trace a route where the footpath would have crossed the River Gade where other remnants can be seen up the hill into Boxmoor beyond. All this is in a direct alignment to the laid hedges at the school some two miles away. In the direction opposite from the Hogwarts like stretch (or ents, or godswoods, or something) the footpath can be traced across the M1 and continues to the region of the old Gorhambury estate and then possibly even on to St Albans.

With a little bit of imagination it’s possible to think that, in the days of Edward III, when the Black Prince came to nearby Berkhamstead Castle to convalesce shortly before he died, a messenger might have been dispatched to the Abbot of St Albans to tell of the arrival of the prince. The messenger would have travelled back down the route to what later became Boxmoor, over the hill and down to ford the shallows of the River Gade. 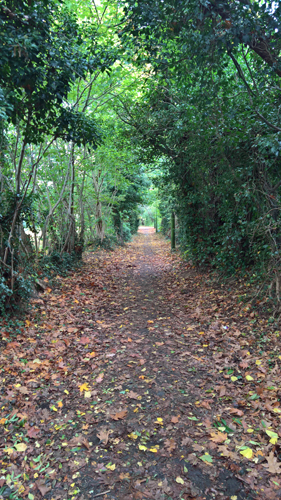 As we pick up his journey our messenger takes up an old sickle that hangs on the post marking the continuing path up the hill. This is a mediaeval convention where a traveller collects this implement and carries it to clear the footpath of any unwanted undergrowth, leaving the sickle at the other end for a returning traveller, thus paths and tracks were maintained by the passage of the locals.

At the top of the hill he passes onto the plateau between Hemel Hempstead and St Albans where he hangs the sickle on a post, for here he is passing into farmland and the path is more frequently travelled. He picks his way through the fields and scattered woodlands, flatter and easier to farm than the slopes he’s just climbed.

Here one of the first council estates would be built after WWII (but the town planners of the mid twentieth century would see fit to leave the footpath largely intact). Passing the future location of Adeyfield School there is a local farmer laying the hedge at a homestead that, many generations later, might become Adeyfield Farm. (You can always tell an old laid hedge as the trees have been partially cut through and bent over so that they grow horizontally, then when they’ve been left alone for a few years they start to grow upwards again.) Along this stretch of the path with these hedges, as would be laid for hundreds of years to come, no sickle would be needed to clear such a well maintained path. 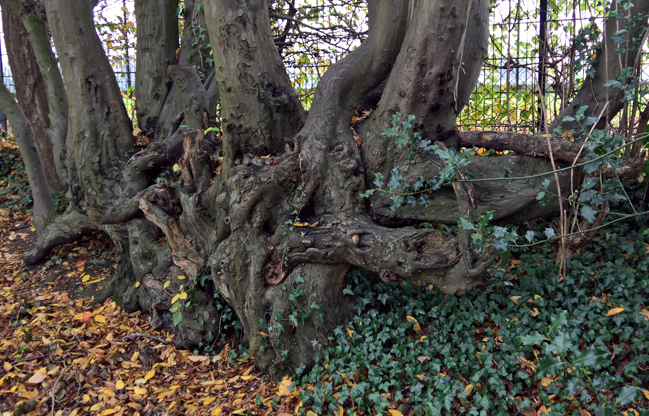 Further on our traveller has a dilemma. The footpath crosses the road where, to the right, it leads directly to St Albans past another homestead later to become Cox Pond Farm and just over the rise the manor of Westwick (later to become the village of Leverstock Green). Right here, at the crossing of the road, hundreds of years later, the Crabtree Pub would be built, not until the Victorian period, but you might imagine it would be built in this location because this is where the footpath crosses the road to St Albans. Does this indicate a bustling location? Perhaps, if the Crabtree pub had a predecessor, our messenger decides to stop here for refreshment before continuing on. 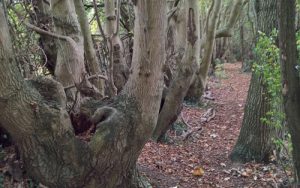 However our traveller, aware that word of the ailing Black Prince’s arrival needs to reach the Abbot of St Albans, he takes a cheeky detour and, instead of turning right, he continues on the footpath towards Gorhambury, where he has a secret purpose. 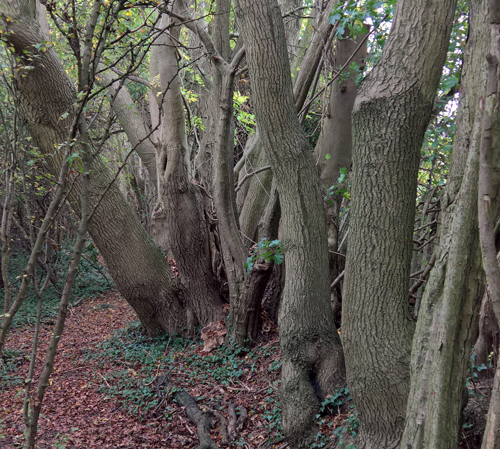 Coppiced trees due to destroyed

He passes through the locations of the future Hemel Hempstead industrial estate and out the other side. Here the footpath kinks and turns along the north boundary of the manor of Westwick. Just here, amid the crumbling ruins and robbed out building materials of an old Romano-Celtic temple, only excavated in the 20th Century, he passes the fields between Woderedynge and Old House Field, a boundary that existed even in the time of the Black Prince.

Here the trees are coppiced, cut back to ground level, to harvest the wood. Trees harvested in this way can survive many hundreds of years and it is said that trees continually coppiced will never die of old age. You can tell how old they are because, over hundreds of years, they become wider the more they are coppiced.

This is the stretch that will eventually become the gnarley ancient trees, inhabited by dreams of wizards and witches in the future, reminiscent of the Forbidden Forest of Hogwarts or perhaps ents, or godswoods… or something.

All this could soon be gone

Soon our late medieval messenger crosses the line of the road that he could never imagine in his dreams (or nightmares) as he crosses the future location of the M1 at Junction 8. It’s possible that our footpath is the very reason the position of M1 Junction 8 is in this location, for the footpath utilises the motorway bridge, thus saving money on an otherwise necessary extra footbridge.

Soon our messenger is in Gorhambury to sneak a short hour to visit his honey, honey being a term for a lover that has persisted since medieval times, as has the footpath he has walked.

He’s made this detour many times before. His master, the priest at Berkhamsted, knows it takes perhaps half a day to walk from Berkhamsted to St Albans but our messenger friend knows that his master won’t know what time he arrived, and the Abbot isn’t expecting him anyway, so a visit to his culver (a medieval name for a dove) as he likes to call her, won’t be noticed.

In modern times instead of the Abbot at St Albans or the priest at Berkhamsted Castle the only person to notice our messenger’s diversion along the Hogwarts path (or the ent path, or the godswood path) would be a different sort of minister, for local campaigners have protested the digging up, defiling and general tarmacking over of our ancient footpath and the case has been referred to the Secretary of State.

Planning applications are a truly arcane and impenetrable business, more so than anything that Harry Potter and his chums get up-to. I’ve tried to find a link to the planning application but even my powers of magick aren’t sufficient to figure it out. So please, if you can find a link then do post comments with the details. Also please share any other information you might have be they links to petitions, historical information, stories of ancient clerical messengers, or whatever.

Please also share this post so we can spread the message as wide as possible and save this ancient footpath. Warehouses be damned!