“After a coffee I paid my bill and headed back to the Truck with my head and hood further down than before. The day had not been going well, the weather wasn’t going to improve, I’d not found an alternative camp site and I wasn’t looking forward to cooking inadequate food in my tent in a howling gale. I did have the thought that I might find a pizza parlour or some such. The Turk’s Head wasn’t able to provide food on a wet Thursday afternoon and I’d not seen anything suitable as I wandered around the town. 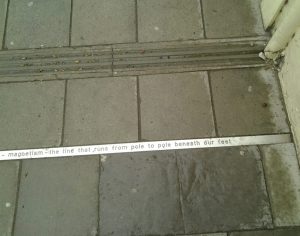 Walking along the pavement, looking at the pavement… looking at nothing but the pavement, I spotted a metal strip running from the adjacent building to the curb. The metal strip, apparently polished by frequent footfall, was engraved with the following phrase, ‘magnetism – the line that runs from pole to pole beneath our feet’ Lifting my hood I looked around and on the wall I found a plaque bearing the words, ‘This plaque was unveiled by the mayor of Louth to commemorate the centenary of the Greenwich Meridian on the 26th June 1984. Coun. A.S. Ward, Town Mayor. L. Riddick Esq. Town Clerk.’ Delighted by the discovery I decided that Louth wasn’t such a bad place after all and decided that, in its honour, I would hereafter refer to the line that delineates East from West as the Louth Meridian for, clearly, this was the reason fate had brought me here. Had it not been raining so horribly I would not have been looking down and would never have made the discovery, so it was obviously all part of the grand plan and serendipity had done its job!” 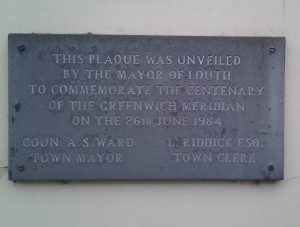