Day 5 to 7 – Cambridgeshire, Suffolk and Norfolk

I’ve not posted for a few days as I’ve just been so busy.

Cambridgeshire (216 miles total), I think that was the day before yesterday gave me a chance to visit Ely Cathedral was was a nice break from the whole process of just heading from one camp site to another. The evening saw me arrive in Isleham which was just within Cambridgeshire so it just counted for my stop for that night. This was what was described as an eco camp so it was all recycled everything and the complete opposite to the manicured finish of the Holiday Park in Huntingdon. Still that’s what you have to go for if you want electrical hookups.

Yesterday was Suffolk (277 miles) which was a bit rubbish actually as I couldn’t find anywhere to get a good signal other than a small village so after sitting in a car park trying to write for an hour or so I drove down to a camp site far to far south just because it looked remote from/main roads (the Huntingdon experience was clearly still affecting me). That was Henry’s lake which had electrics and water but was a bit sterile, but I think they cater for the fishing market for which the lake is probably/their USP. Still their loos and showers were brilliant and a real bonus after the eco camp. (Buy the book for the full story.)

Today is Norfolk (357 miles) so getting a signal being one of the big issues with nice remote sites I headed to Thetford, found a pub and a guy recommended I head for Happisburugh where I am now. I just took a chance on finding somewhere to camp as there was a caravan park on the map so I just drove here on spec. Chance has led me to the most spectacular camp site I’ve had so far. I did think about camping close to the edge of the cliff but with the stories or erosion there was a chance I’d end up at the bottom by the morning. I’m now about 200 to 300 yards from the cliff edge though the cliff might be a few feet closer by the morning. 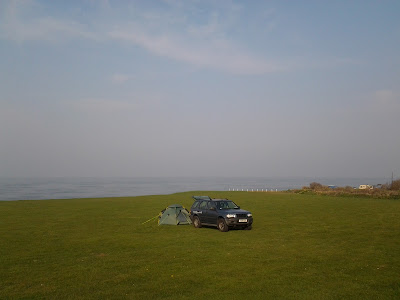