R2D2 gets his reward for good behaviour over the holidays

After a relatively well-behaved holiday season R2D2 was rewarded with a trip out to see The Rise of Skywalker on Saturday night. He’s been increasingly bothersome since we got back from the visit to relatives over Christmas and I’d just about had enough. My muse and I went out during the day on Saturday and by the time we got back from the garden centre he was following us around the house pestering us to book the tickets. We eventually booked the 21.30 showing at the local multiplex giving us time have dinner and squeeze in an episode of Carnival Row. He does enjoy the show but we had to coax him out from behind the sofa when Orlando Bloom confronted the monster in the sewers.

By the time we’d finished watching, including repeatedly winding back a few scenes when R2D2 needed a bit of extra explanation, we realised that the film was due to start in a few minutes so we had to rush out. I have to say I was tempted to leave him behind and it was only my muse who persuaded me to take him with us. I know this sounds cruel but he can be so insistent when he gets an idea in his circuits. What with him demanding we pause for a photo shoot at every opportunity everything has to stop and I was concerned that we might miss the start. 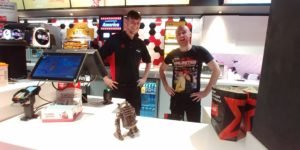 R2D2 made some new friends at the cinema

Strangely, the streets were empty on the way there so we wondered if we’d missed some major world event while at the garden centre and R2D2 had forgotten to tell us. (He once tried to keep us from finding out about Brexit after we’d been away the day before but I think he might have been having buyer’s remorse after he stole my postal vote. Sometimes I think he really doesn’t get it.) As it happened we were in plenty of time and R2D2 appreciated the trailers as much as the rest of the film.

Between the three of us we really enjoyed the film, having all the right elements of a classic Star Wars episode. It had just the right amount of action, plenty of chases, some good gags (yes, they fly now – and why didn’t they before?) and they managed to include some favourite characters from the old days. R2D2 did wonder what happened to C3PO, when in the last film he had picked up a red arm that he didn’t have any more; we couldn’t see if he still had the silver leg from the earlier films and shouldn’t he have a hole where his restraining bolt had previously been fitted. 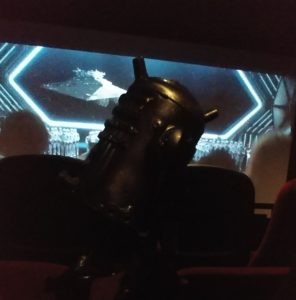 The final scenes included some good plot twists with resolution that made sense and didn’t seem forced while respecting the structure of the of the previous story. The film seemed to bring the nine episodes to a close with no need for yet more sequels but, of course, leaving the door open a crack if Disney fancy a cash injection in years to come.

The world seemed quiet again as we left with R2D2’s chirps and beeps echoing around the foyer walking out into the deserted night. Had Trump finally blown it while we watched the final epic struggle between good and evil?

Regardless of world events the whole thing was something of a bitter sweet experience for R2D2 as he’s sad that there won’t be any more. It’s going to leave a bit of a hole in his life, he tried to get into the Marvel films for a while but the idea of a film starring a character made of metal just didn’t seem realistic in his eyes. He’s beginning to talk about taking up fishing.