R2D2 Helped me wrap the presents and put up the tree 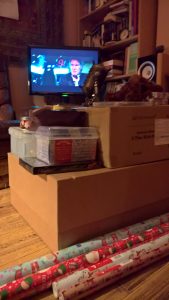 After R2D2 redeemed himself on Sunday by helping out with the filming of my promo video for the travelogue, and not stealing anything technical to give to C3PO, I decided to give him a bit of reward.

So tonight we sat down and, in preparation for watching The Last Jedi on Friday night, I said he could watch The Force Awakens again, but only so long as he helped me wrap the presents and put up the tree. Admittedly there was a bit of a moment when he insisted that he was only interested in wrapping his own presents but, eventually, he saw the logic of not doing that and said he would help wrapping them so long as he could start with C3PO’s present. Honestly, sometimes I despair with him; for someone with the mental capacity of Marvin on lithium he can be extremely lacking in common sense. What do they call Asperger’s for robots?

Of course, what really happened was we ended up watching The Force Awakens (which he’s seen before) and he sat there watching for 2hrs 15 minutes while I wrapped presents. Just to be awkward he insisted on sitting on the pile of unwrapped presents to get a better view which sort of hindered me in the process. However, it did mean that he was occupied with the film while I got on with the presents which is probably for the best. 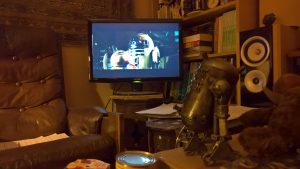 Frankly, in previous years there have been times where, with his help, there has been such a mess with the Sellotape, it gets wrapped around his wheels then it gets caught up in his legs and eventually it gets in his drive train and it’s the devil’s own job to get it all out. I’m sure there’s a bit of gaffer tape stuck in there from a few years ago when we went camping. And you’d think C3PO would help, but if he’s not searching the dark web for illicit images of Tricia Helfer with her servos out he’s trying to figure out ways of hacking into the bitcoin network to bring about the next recession. But don’t try to ask him for help, he might speak six million languages, but he can swear in seven and a half million. 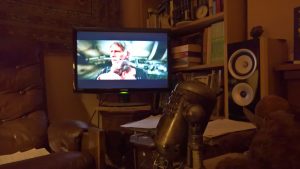 Anyway, we got to the end of the film and R2D2 did help me wrap the remaining presents, mainly the big ones that he’d been sitting on and it all got done. And after that he helped me put the tree up which was a real support. I’d bought a new string of LED lights for the tree, C3PO had his eye on them saying they could be useful for some scheme he was talking about but, to be honest, I’m sick of hearing about it all and, you know, I’d rather he didn’t tell me; plausible deniability and all that.

Anyway, I had a bit of a problem knowing if I’d need the full 16 metres of lights for the small tree. I thought there would be some left over at the end and that I’d have to run the excess along a shelf or nearby curtain pole or something. But you know how you have to use more lights at the bottom of a tree because you need two or even three loops on the bottom layers of branches and less as you go up. Well anyway R2D2, bless him, worked out the cumulative circumference of each loop around the tree as I went up the layers and even figured out the light output and advised me to stick a bit of extra silver tinsel in the middle because it would cover up the spindly wire bits where the branches join to the trunk. He’s a good lad really, I’m sure the problems I have with him are more to do with influences from you know who. 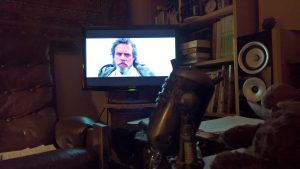 So now it’s all done. The decorations, for what they’re worth, are up and the tree is looking better than ever. R2D2 helped me put the presents under the tree and hopefully C3PO won’t feel he has to help himself to any in the hope he can find some spare parts. He’s been looking to get rid of that red arm for a while now as, apparently, the owner wants it back. 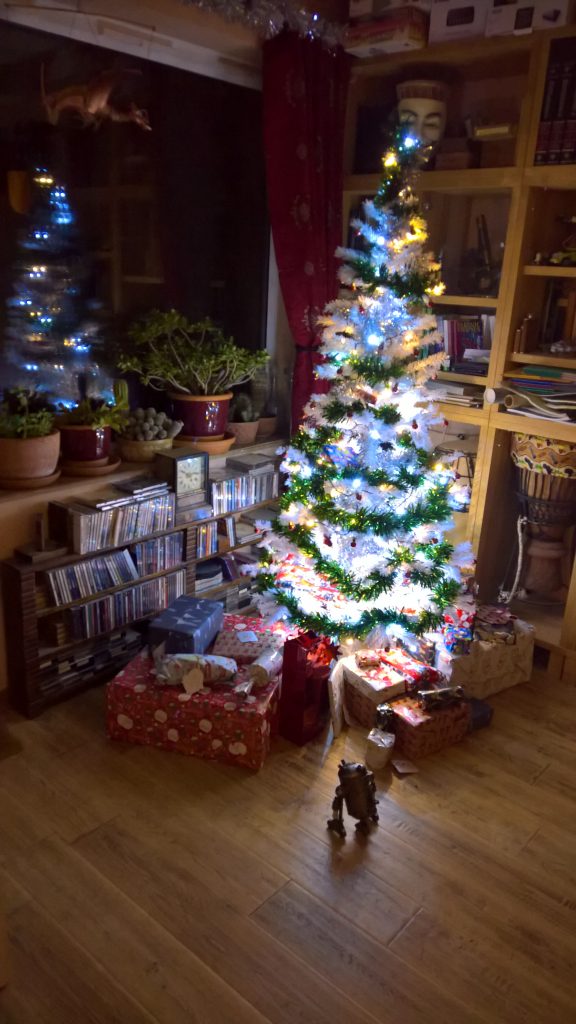