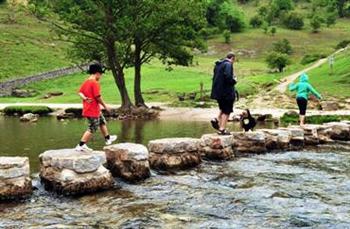 It’s been reported that there is an uproar about the maintenance of the famous stepping stones over the river Dove at Dovedale in Derbyshire.

I would have thought that reasonable maintenance is appropriate. We look after our cathedrals to stop them falling down (Yorkminster has been massively underpinned). Were Stonehenge in a more complete condition we might consider maintaining it. It’s only because it’s frozen in time that leave it as it is and I’m sure that there is subtle maintenance that many of us aren’t aware of. (Isn’t one of the uprights of one of the triathlons underpinned with a concrete support to stop it collapsing? Or is that one of the stones at Avebury that I’m thinking of?)

Surely, if the stepping stones are worn and people are in danger of falling then the thing to do is to sensitively replace them with new stones here and there rather than top them off. The idea that they are ‘a part of the natural landscape’ is just fantasy.

Some people seem to believe that anything old is good and that anything new is bad. In that case don’t drive or use a computer. The past was never preserved in aspic and it’s probably only since the Victorian era that we have had this idea that the past in an unchanging era of romantic loveliness.