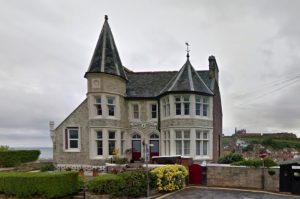 “Graham has always been a bit of a trickster and claiming he lived in Bram Stoker’s old house is just the sort of thing he’d be likely to make up, especially for a callow youth as I was at the time. So, I went looking for a house that looked like Bram Stoker’s inspiration, saw some turrets and assumed I’d found it. Significant experiences often happen in that way but don’t necessarily mean we’ve found the truth. However, the web suggests Bram Stoker lived in a house on Royal Crescent, a much grander street. Royal Crescent, though, is lacking inspirational features such as the turreted house called Streonshalh. 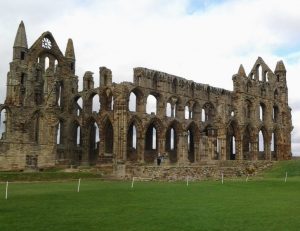 The mystery deepens when you consider Streonshalh is opposite a road called East Crescent. Furthermore, Streonshalh looks out across the bay affording a view of the harbour and directly towards the skeletal remains of Whitby Abbey on the cliff top. Directly beneath the view of the abbey is a small beach, Tate Hill Sands where Bram Stoker refers to Dracula’s ship, Demeter, coming ashore, ‘…into the southeast corner of the pier jutting under East Cliff, known locally as Tate Hill Pier.’ Stoker could have gazed from one of those turrets down to Tate Hill Pier and described the location in detail without ever stepping outside. The view from Royal Crescent, however, affords no such inspiration. Additionally, Bram Stoker listed the address in Dracula as 7, The Crescent; so East Crescent or Royal Crescent could fit. 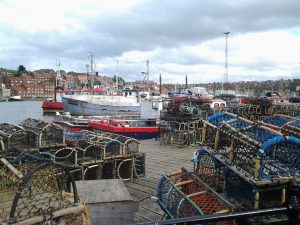 The third option is 7 East Crescent, a respectable looking guest house making no such claims, yet looks out at Streonshalh and to the abbey ruins beyond. Did Stoker sit in this unassuming house inspired by the gothic revival house and dream of Carpathian castles concocting a combination all of the features in this view?”

Abridged extract from In SatNav We Trust – A search for meaning through the historic counties of England, a journey through England’s historic counties, through ideas or science and belief, all the while searching for meaning and a bed for the night. Or was that the other way around?