I’ve been away you know. You may not know, other than the lack of posts over the last couple of weeks, but I’ve been in Amsterdam with friends for New Year where we played murder mystery and I played Enrico the farm hand with an outrageous west country accent and many ooh-arrs. (Enrico was supposed to be from Mexico and was definitely a wrong-un. I’d call that racist writing but it turned out everyone was a wrong-un in this murder mystery. Anyway, I don’t know how to portray a Mexican farm hand so I pretended he came from Somerset, which may make me the racist) Before that I was in Christmas land with many presents, both in and out, and too much port and stilton. 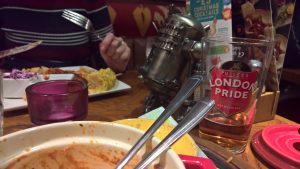 However, the reason for this post is that before all this happened I took R2D2 to the cinema to watch The Last Jedi, which he had been getting very excited about. That all seems a very long time ago now but R2D2 seemed to enjoy it, especially going out to dinner with us before the film when he had a sip of my London Pride and temporarily lost control of his stabilisers. I’ll not spoil the film for you if you’ve not seen it but I will say that I genuinely believe the Star Wars films have been getting better over the last few years.

Before The Force Awakens came out two years ago R2D2 and I sat down to watch the full sequence of Star Wars films in chronological/storyline order. Everyone knows that the prequels are a bit pants but that’s mostly because of Jar Jar Binks, and Hayden Christensen being a bit wet, oh and young Anakin was really annoying. However, R2D2 and I were surprised to discover how slow the first Star Wars (ep IV) film was. I don’t think it’s much of a spoiler to say that the plot of the first film was basically: boy discovers plans for evil space station, boy discovers he has super powers to destroy evil space station, boy destroys evil space station, but in 1977 it was all pretty revolutionary. R2D2 says it was better because he was in it but then he says that about all of them so he’s not very consistent in his criticism. 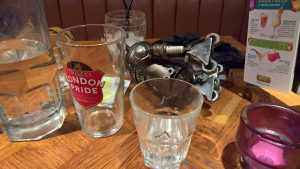 However, things have moved on since then. I don’t like to think it’s the influence of Disney (are we all aware that there is no blood in the films? I guess that was always the case as lightsabres cauterize all wounds) but as well as ensuring the family values of the Star Wars canon Disney do seem to have added a new level of sophistication to the plots. Last year’s Rogue One was emotionally engaging, what with the real peril the characters were faced with. The Last Jedi also seems to have more depth and there were points when R2D2 had to hide under the seats what with Kylo Ren seeming to find a bit of menace that we both thought was lacking in The Force Awakens. 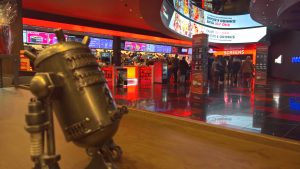 So, The Last Jedi is better written and perhaps better plotted, though it has its weird bits shoehorned in for the fans, such as the green milk incident that is genuinely disturbing. As with the other recent films there are plenty of other visual references to the original films such as narrow bridges across lofty sheer drops and plenty of dog fights. (They’ve invented lightsabres but haven’t invented railings or health and safety.) Having said that I can’t help wonder how bombs fall downwards in space, but R2D2 suspects George Lucas will have published an explanation.

At the end of the film we bounced out feeling good about ourselves happy in the knowledge that the guy in the white hat always wins. Of course, this lasted only a moment when we discovered a guy sitting outside in the cold clearly preparing to sleep out in the December night so we gave him what we could and went away wishing we had given him more. That only leads us all to ask who runs the evil Galactic Empire of our world, which is not a long time ago and very much in our own galaxy? 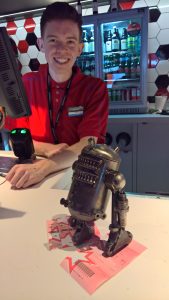 So, a couple of days later I went off to Amsterdam for New Year, leaving R2D2 to look after the house. C3PO had gone away for the full holiday period but reappeared unexpectedly just before we left. I had to ask R2D2 to keep an eye on the situation as, of course, C3PO was still asleep after getting in after midnight which meant that, when we got up at 6am to drive to Dover, I didn’t have a chance to say I didn’t want any unexpected techno parties. The trouble is that R2D2 is so easily led by C3PO that he only has to offer him an illicit BIOS upgrade and R2D2 just gives up and goes along with whatever nefarious scheme C3PO is planning. The last time that happened R2D2 lost control of all the servos down his left side and could only hobble around in circles for a week until I got some technical support from the IT guys at the Friday lunch club.

A few days later, after many museums, many Rembrandts and Vermeers, many trams and, not to mention, Enrico trying to seduce my friend’s mother, we got back and the house was still standing. It seemed that R2D2 had taken my request to heart and threatened to reinstall C3PO’s restraining bolt when he’s inevitably unconscious waiting for his thermal cut-outs to reset after the New Year tech-trance session.